What is Disinfectants and Mode of Action of Disinfection solution?

What is Disinfectants and Mode of Action of Disinfection solution?

What is Disinfectants?
According to Webster, disinfect is to cleanse so as to destroy or prevent the growth of disease-carrying microorganisms. Therefore a disinfectant is an agent, such as heat, irradiation or chemical that disinfects by destroying, neutralizing or inhibiting the growth of disease-carrying microorganisms.
EPA further defines disinfectants as products that are used on hard inanimate surfaces and objects to destroy or irreversibly inactivate fungi and bacteria but not necessarily their spores. 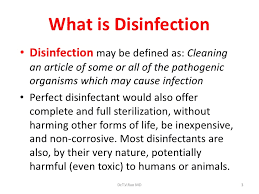 Disinfectants are usually complex formulations of active molecules, sometimes also containing co-solvents, chelating agents, acidic or alkaline agents, or surface-active or anti-corrosive products. It should also be noted that there may be considerable variation (in terms of pH, hardness, salinity, etc.). Understanding the mode of action of disinfectants requires an examination of the structure and functions of the bacterial cell. 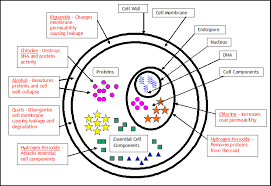 Mode of Action of Disinfections solution:
Disinfectants can act on microorganisms in two different ways:
1.       Growth inhibition (bacteriostasis, fungistatic).
2.       Lethal action (bactericidal, fungicidal or virucidal effects).
Possible stages of the Mode of Action of Disinfectant:
1.  Action on the external membrane of the bacterial wall.
2. Action on the bacterial wall.
3.  Action on the cytoplasmic membrane.
4.  Action on the cytoplasm and nucleus.
5. Action on bacterial spores.
Mode of Action of various Disinfectants:
1. Acidic and Alkaline Compounds:
The efficacy of acidic and alkaline agents is linked to the concentration of hydrogen (H+) and hydroxyl (OH–) ions.
H + ions destroy the amino-acid bond in nucleic acids, modify the cytoplasmic pH and precipitate proteins and OH– ions saponify the lipids in the enveloping membrane, leading to the destruction of the superficial structure.
A pH higher than 10.0 disorganizes the structure of the Peptidoglycan and causes hydrolysis of the nucleotides of the virus genome. Similarly, the pH must exceed 12.0 to act on Mycobacteria. 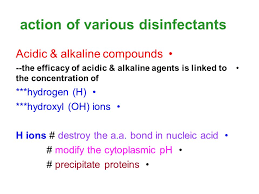 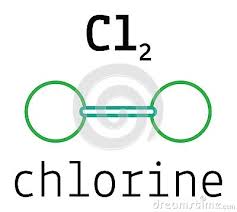 Chlorine and derivatives kill pathogens such as bacteria and viruses by breaking the chemical bonds in their molecules. Disinfectants that are used for this purpose consist of chlorine compounds that can exchange atoms with other compounds, such as enzymes in bacteria and other cells. When enzymes come in contact with chlorine, one or more of the hydrogen atoms in the molecule are replaced by chlorine. This causes the entire molecule to change shape or fall apart. When enzymes do not function properly, a cell or bacterium will die. 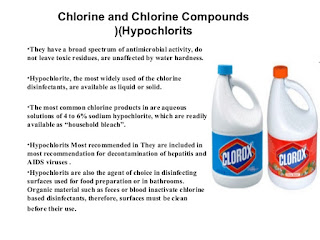 Disinfection time for several different types of pathogenic microorganisms with chlorinated water, containing a chlorine concentration of 1 mg/L (1 ppm) when pH = 7,5 and T = 25 °C
3. Quaternary Ammonium compounds:
Quaternary ammonium compounds (QACs) have strong bactericidal properties, but weak detergent properties.  Their antimicrobial properties depend on their structure and size, but especially on the length of the long-chain alkyl group. QACs irreversibly bind to the phospholipids and proteins of the membrane, thereby impairing permeability. The capacity of the bacterial cell to absorb such molecules influences sensitivity.
The antimicrobial activity of quaternary ammonium with an alkyl chain is related to lipophilia and peaks between C1 2 and C1 6 (for both Gram-positive and Gram-negative bacterial strains).
The efficacy of QACs increases with temperature and pH. They have a wide application range, from clinical to industrial purposes, and are particularly used for the disinfection of surfaces, equipment and medical devices, and the preservation of products. 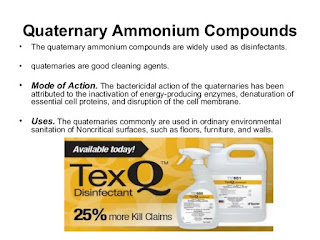 The antimicrobial range of QACs is less than that of the oxidizing disinfectants. They are less effective against Gram-negative bacteria than against Gram-positive bacteria. They also have limited activity against bacterial spores and very little activity against viruses. To be effective against yeasts and molds, a higher concentration is required. 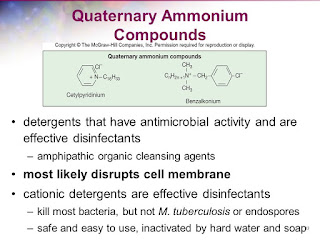 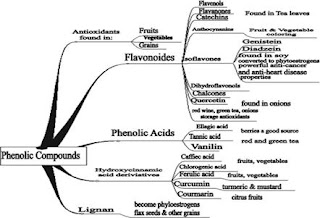 Phenol and its derivatives exhibit several types of bactericidal action. Mechanism of action: Cross-linking, coagulating, and clumping. Phenol acts specifically on the cell membrane and inactivates intracytoplasmic enzymes by forming unstable complexes. The lipophilic molecules are trapped by the membrane phospholipids. The following processes are involved:
If the concentration is low, the cell constituents (nucleic acids, glutamic acid) are liberated in the external media.
If the concentration is high, the disinfectants inhibit permeases, thus causing denaturation of the bacterial proteins and lysis of the cell membrane.
The next level in the damage to the bacteria is the loss in the membrane’s ability to act as a barrier to physical or chemical attack. 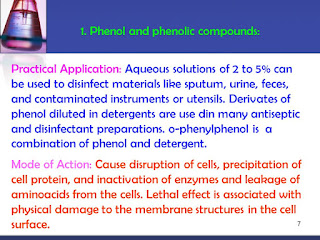 5. Hydrogen peroxide:
Hydrogen peroxide is a widely used antimicrobial chemical. It is used in both liquid and gas form for preservative, disinfection and sterilization applications. Its advantages include its potent and broad-spectrum antimicrobial activity, flexibility in use, and safety profile in comparison to other microbiocides. Hydrogen peroxide has been shown to be effective against all forms of microorganisms, including dormant forms with known high resistance such as bacterial spores and protozoal cysts, and also infectious proteins such as prions depending on the specific use of the chemical.
Hydrogen peroxide attack on proteins, nucleic acids, and lipids. Hydrogen Peroxides play an important part in degrading the bacterial cell.  In the presence of oxidizing agents such as peroxides, bacteria such as E. coli defend themselves by producing enzymes that either destroy the oxidizing agent before bacterial degradation takes place or help the restoring mechanisms. Oxidized molecules are more sensitive to proteolysis than other molecules, and it has been suggested that a ‘system of cell sanitization’ may enter into effect under the action of an oxidizing agent such as Hydrogen peroxide
The general mechanisms of action of hydrogen peroxide significantly reduce any risk of the development of resistance to the biocide over time, unlike many other types of anti‐infective drugs or biocides. Microbial resistance to peroxide is primarily due to the various natural differences observed in the growth and survival of microorganisms but can be overcome by the right process and application with hydrogen peroxide‐containing products. The many benefits in the use of liquid and gas hydrogen peroxide for antimicrobial applications make it attractive for future and optimal developments with this microbiocide. 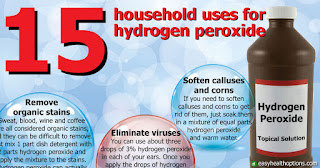 Why Is 70% IPA a Better Disinfectant than other concentrations?

2 thoughts on “What is Disinfectants and Mode of Action of Disinfection solution?”