RHEUMATOID ARTHRITIS AND ITS TREATMENT (A REVIEW ARTICLE) 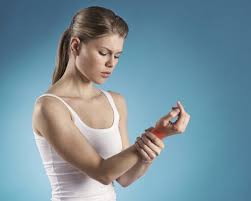 INTRODUCTION
Rheumatoid arthritis (RA) is an autoimmune disease that causes chronic inflammation of the joints and other areas of the joints and of the body. Autoimmune diseases are illnesses that occur when the body’s tissue are mistakenly attacked by their own immune system. RA is a destructive joint disease that is caused by inflammation in the tissue that normally produces lubrication fluid for the joints. When this tissue remain inflamed, it leads to deformity by loosening joint ligaments or to joint destruction by eroding away cartilage and bone or both.
The joint inflammation of rheumatoid arthritis causes swelling, pain, stiffness, and redness in the joints. The inflammation of RA can also occur in tissues around the joints, such as the tendons, ligaments, and muscles. In some people with RA, chronic inflammation leads to the destruction of cartilage, bone and ligaments, causing deformity of the joints.
The immune system contains a complex organization of cells and antibodies designed normally to “seek and destroy” invaders of the body, particularly infections. Patient with autoimmune disease have antibodies and immune cells in their body that target their own body tissues.
Inflammation of the tissues around the joints and inflammatory arthritis are characteristic features of rheumatoid arthritis, the disease can also cause inflammation and injury in other organs of the body.
Because it can affect multiple other organs of the body, rheumatoid arthritis is referred to as a systemic illness and is sometimes called rheumatic disease.
The disease can begin at any age even affecting children. Rheumatoidarthritis that begin in people under the age of 16 years is referred to as “Juvenile idiopathic arthritis” (JIA). But it most often starts after 40 years of age and before 60 years of age.
Though uncommon, in some families multiple members can be affected, suggesting a genetic basis for the disorder.
RHEUMATOID ARTITHRITIS CAUSES AND RISK FACTORS:
The cause of RA is unknown. Even though infectious agents such as viruses, bacteria and fungi have long been suspected, none have been proven as the causes.  The cause of RA is a very active area of worldwide research. It is also suspected that tendency to develop RA may be genetically inherited (hereditary). Certain genes have been identified that increases the risk for RA. It is also suspected that certain infections or factors in the environment trigger the activation of the immune systems then attacks the body’s own tissues. This leads to inflammation in the joints and sometimes in various organ of the body, such as the lungs or eyes.

It is not known that what trigger the onset of RA. 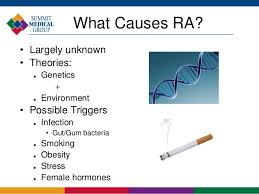 Gum bacteria, smoking and gum disease:
Scientist have reported that smoking, tobacco, exposure to silica mineral, and chronic periodontal disease all increase the risk of developing RA.  There are theories about different gut bacteria that might trigger the onset of RA in genetically susceptible individuals. No specific microbes have been identified as definite causes.
COMPLICATION S OF RHEUMATOID ARTHRITIS
Since RA is a systemic disease, its inflammation can affect organs and areas of the body other than the joints.
Inflammation of the glands of the eyes and mouth can cause dryness of these areas and is referred as Sjogren’s syndrome. Dryness of the eyes can lead to corneal abrasion. Inflammation of white part of eyes (the sclera) is referred to as sclerotic and can be very dangerous to the eye.
Rheumatoid inflammation of the lung lining (pleuritis) causes chest pain with deep breathing, shortness of breath, or coughing. The lung tissue itself can also become inflamed and scares, and sometimes nodules of inflammation (rheumatoid nodules) develop within lung. Inflammation of the tissue (pericardium) surrounding the heart, called pericarditis, can cause a chest pain that typically changes in intensity when lying down on leaning forward. Rheumatoid arthritis is associated with an increased risk of heart attack.
Rheumatoid disease can reduce the number of red blood cells (anemia) and white blood cells. Decreased white blood cells can be associated with an enlarged spleen (Felty’s syndrome) and can increase the risk of infections.
The risk of lymph gland cancer (lymphoma) is higher in patients with RA, especially in those with sustained active joint inflammation.
Firm lumps or firm bumps under the skin (subcutaneous nodules called rheumatoid nodules) can occur around the elbows and fingers. Nerves can become pinched in the wrist to cause carpal tunnel syndrome.
A rare serious complication, usually with longstanding rheumatoid disease, is blood vessel inflammation (vasculitis). Vasculitis can impair blood supply to tissues and lead to tissue death (necrosis).
RHEUMATOID ARTHRITIS SYMPTOMS AND SIGNS

RA symptoms come and go, depending on the degree of tissues are inflammation. When body tissues are inflamed, the disease is active.  When tissue inflammation subsides, the disease is inactive (in remission). Remission can occur spontaneously or with treatment and can last weeks, months, or years. During remissions, symptoms of the disease disappear, and people generally feel well. When the disease becomes active again (relapse), symptoms return. The return of disease activity and symptoms is called a flare.  The course of RA varies among affected individuals, and period of flares and remission are typical. 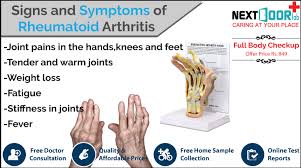 When the disease is active, RA symptoms can include:
•        Fatigue
•        Loss of energy,
•        Lack of appetite,
•        Low- grade fever,
•        Muscle and joint aches, and
•        Stiffness.
Muscle and joint stiffness are usually most notable in the morning and after periods of inactivity. This is referred to as morning stiffness and post sedentary stiffness. Arthritis is common during disease flares. Also during flares, joints frequently become warm, red, swollen, painful, and tender. This occurs because the lining of the joints (synovium) becomes inflamed, resulting in the production of excessive joint fluid (synovial fluid). The synovium also thickens with inflammation (synovitis).
Rheumatoid arthritis usually inflames multiple joints and affects both sides of the body. Early RA symptoms may be subtle. Early symptoms of rheumatoid arthritis can be pain and prolonged stiffness of joints, particularly in the morning. Symptoms in the hands with rheumatoid arthritis include difficulty with simple tasks of daily living, such as turning door knobs and opening jars. The small joints of the feet are also commonly involved, which can led to painful walking, especially in the morning after arising from bed. Chronic inflammation can cause damage to body tissues, including cartilage and bone. This leads to a loss of cartilage and erosion and weakness of the bones as well as the muscles, resulting in joint deformity, loss of range of motion, destruction, and loss of function. “cricoarytenoid joint” is a joint which is responsible for the tightening of our vocal cords to change tone of our voice. When this joint is inflamed, it can cause hoarseness of the voice. Symptoms in children with RA include limping, irritability, crying and poor appetite.
TEST USE TO DIAGNOSE RA:
The diagnosis is based on the clinical presentation, there is no singular test for diagnosing. Ultimately it is diagnosed based on a combination of the presentation of the joints involved, characteristic joint swelling and stiffness in the morning, the presence of blood rheumatoid factor (RF test ad RA test) and citronella antibody, as well as findings rheumatoid arthritis and radio graphic changes (X-ray testing).
The diagnosis will be based on the pattern of symptoms, the distribution of the inflamed joints, and the blood and X-ray findings. It is the inflammation in the joint that helps to distinguish rheumatoid arthritis from common types of arthritis that are not inflammatory, such as osteoarthritis or degenerative arthritis.
An antibody called “rheumatoid factor” (RF) can be found in 80% of patients with rheumatoid arthritis. Patient with rheumatoid factor are referred to as having “seropositive rheumatoid arthritis”. Patients who are felt to have rheumatoid arthritis and do not have rheumatoid factor testing are referred to as having “seronegative rheumatoid arthritis’. 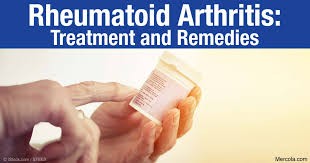 Another antibody called the “antinuclear antibody” (ANA) is also frequently found in people with rheumatoidarthritis.
A blood test called the sedimentation rate (sed rate) is a crude measure of the inflammation of the joints. The sed rate actually measures how fast red blood cells fall to the bottom of a test tube. The sed rate is usually faster (high) during disease flares and slower (low) during remissions.
The other blood test that is used to measure the degree of inflammation present in the body is the C-reactive protein. Blood testing may also reveal anemia, since anemia is common in rheumatoid arthritis, particularly because of the chronic inflammation.
NOTE: The rheumatoid factor, ANA, Sed rate, and C-reactive protein tests can be abnormal another systematic autoimmune and inflammatory medical conditions. Therefore abnormalities in these blood tests alone are not sufficient for a firm diagnosis of RA.
The doctor may elect to perform an office procedure called arthrocentesis. In this procedure, a sterile needle and syringe are used to drain out fluid out of the joints for study in laboratory. Analysis of the joint fluid in the laboratory can help to exclude other causes of arthritis, such as infection and gout. Arthrocentesis can also be helpful in relieving joint swelling and pain. Occasionally, cortisone medications are injected into the joint during the arthrocentesis in order to rapidly relieve joint inflammation and further reduce symptoms.
STAGES OF RHEUMATOID ARTHRTIS:

The American college of Rheumatology has developed a system for classifying rheumatoid arthritis that is primarily based upon the X-ray appearance of the joints. This system helps medical professionals classify the severity of your rheumatoid arthritis with respect to cartilage, ligaments, and bone. 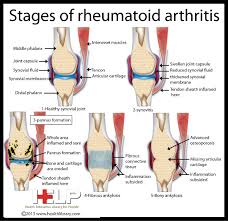 6 thoughts on “RHEUMATOID ARTHRITIS AND ITS TREATMENT (A REVIEW ARTICLE)”